In previous posts, we’ve featured stories about the loving connection between animals and humans that sometimes brings them together in more than one life. This one, from a blog called  Animals are Soul, spoke to our hearts and we’d like to share it with you. It’s re-printed here with permission.

The Cat with a Heart

My wife, Luanne, and I got our all-black cat Shadow when he was a kitten. After only eight short years, he started having problems that led to his passing. Luanne was devastated over the loss. What made it even more difficult was that Shadow’s death happened while I was out of town. We weren’t able to all be together when the time came for Shadow to leave us.

Soon after Shadow was gone, I lay in bed one night, when all of a sudden, I saw an image of him walking across the floor and heading toward the bed.

Yes, I saw the cat who had just died walk into the room and change from his cat body into a small sphere of light and then back into the form of a cat. I realized Shadow was still with us in spirit.

I said to Luanne, “I saw the cat in the bedroom.”

I wondered if my wife’s deep sadness might be a wall between her and Shadow that was too strong for him to break through.

On the night after I saw Shadow’s light body, I suddenly felt two taps on the bed. Whenever Shadow wanted to sleep with us, he had this habit of tapping his paw twice on the side of our bed covers. I would lift up the comforter, and the cat would jump onto the bed and snuggle cozily on the blankets, covered by the comforter.

Half asleep, feeling the two taps, as usual, I automatically lifted up the comforter to make room for the cat. His spirit body followed through with our nightly ritual, and he walked over me to sink into his cozy place. I could actually feel the pressure of his form.

That night, I saw Shadow in my dream state. He said to me, “I’m coming back.”

How am I going to find you? I wondered.

A few days later, while I worked on my laptop, the photo of a little black kitten floated across the screen. The caption above the picture read, “Rescue Me.”

You’ve got to be kidding me, I thought. How is this possible?

I’d never had ads of any kind cross my computer screen. The photo and caption made me wonder if Shadow might be coming back to us as the kitten I’d seen in the ad.

That night, I did a spiritual exercise and contemplation. Inwardly I saw Shadow. “How will I know it’s you?” I asked him.

“You’ll know me by my heart,” he answered.

The next morning when I woke up, I could hear Shadow’s words like an echo: “You’ll know me by my heart.”

The next day, I stopped at a grocery store and did some shopping. Afterward I was taking the grocery bags out of the cart and putting them into my car when inwardly I heard my spiritual guide, the Mahanta, say, “Pick up the grocery-store flyer in the bottom of the cart.”

I thought, I already have a flyer. I don’t need another one.

Again the inner voice said, “Pick up the flyer.”

Nope, I have one in my pocket and one at home. I don’t need another.

Loud and clear, the Inner Master said, “PICK UP THE FLYER.”

When I picked up the flyer, I saw a magazine under it. A full-size picture of a black cat’s face seemed to be looking up at me from the cover. Amazingly, this cat looked exactly like Shadow.

I threw the magazine onto my car seat and brought it home with the groceries. After putting the groceries away, I placed the magazine on my desk next to the laptop and turned on the computer. Again I saw the picture of a kitten across the screen with the caption “Rescue Me.”

I picked up the magazine and thought, How amazing. It’s as if someone took a picture of Shadow and put it on this magazine. Now looking at the kitten on my laptop, I wondered, Is this my message that Shadow is now back as the kitten on my screen? Then I randomly opened the magazine. On the page I turned to, there was a photo of a little black kitten next to the words “It’s me.”

“You have got to be kidding,” I said out loud.

I have to go see this kitten who keeps popping up on my laptop screen, I thought.

I contacted the woman who had placed the ad I saw on my computer and found out she lived in New Jersey. I live in Connecticut. Who would drive all the way to New Jersey to get a cat?

Well, with all the traffic it turned out to be a three-hour drive. But I finally arrived at the kitten’s home. I picked him up and turned him onto his back, holding him under the lamp so I could look into his eyes.

Wow! I felt an immediate connection. My heart was touched by the feeling of divine love that reached through the eyes of this little being—this beautiful little black kitten. I could feel the consciousness, the essence of that Soul we had called Shadow, now in this new little form. I had no doubt. I needed no further confirmation.

She said, “How’d you like to take his sister too? They play so well together. She’s always right at his side. It’s like they’re joined at the hip.” Then she handed me a little black kitten who looked exactly like the one I’d come to meet. 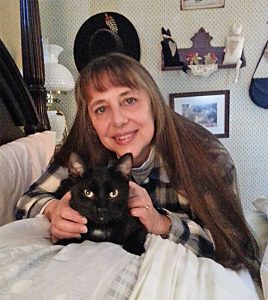 So I drove back to Connecticut with two kittens.

When my wife came home from work, she was so excited to see these two adorable little fur-faces. I watched and felt her sadness melt away as her heart opened to our new kitties.

Of course, we named him Shadow. Luanne named his sister Jersey Girl.

Later that day, I was working in my home office when Luanne called to me and said, “You know, Shadow isn’t totally black. He has a birthmark. You gotta come see this.”

I went out to see what she was talking about and stood there, awestruck. In the middle of the kitten’s chest was a perfectly shaped white heart. I felt goosebumps as I remembered Shadow’s echo from my dream: “You’ll know me by my heart.” 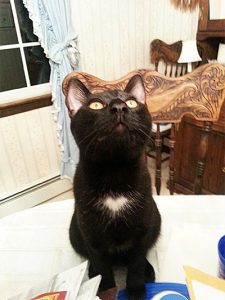 When there’s that bond of divine love, our pets do sometimes come back to be with us again.

Old Shadow had a favorite spot in our guest bedroom where he liked to curl up under the desk. One day Luanne was trying to find New Shadow, and I said, “Did you look under the desk?” Sure enough, that’s where she found him. He had returned not only to us but also to his best hiding place in our home.

Old Shadow had a favorite toy he would carry around the house. It was a four-inch-long, oblong piece of stiff-but-flexible black fur that looked like a tail. He’d walk with it in his mouth everywhere. It was easy to spot when he played with the black toy on our white carpet. After Shadow died, it was too painful to come across his special toy. So I gathered up all the cat toys, put them in a basket in the basement, and buried Shadow’s toy at the bottom of the basket. 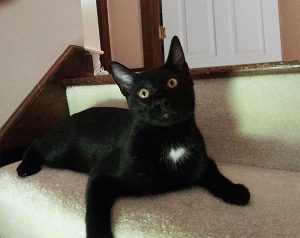 When New Shadow was big enough to climb the stairs, he went down into the basement one day. After he came back up, Luanne said, “I don’t believe it.” I turned around to look. There sat Shadow at the top of the stairs with that favorite black fur toy in his mouth. He had dug through the entire basket to find it.

Now, every so often, while we’re getting ready for bed, we find a sweet present for us on one of our pillows. Just as he always used to do, Shadow has placed his favorite toy there. It’s as if once more he’s saying to us, “See, it’s really me.”

A Contemplation Seed
By Harold Klemp, from Animals Are Soul Too!

Whether or not your philosophy or religion accepts Souls in forms other than the human is unimportant. If you can accept reincarnation and the fact that Soul takes on many different bodies—and some of these Souls are better vehicles for love than some people—you will find much joy and happiness in your own life. You’ll also find a greater understanding of God’s creation.