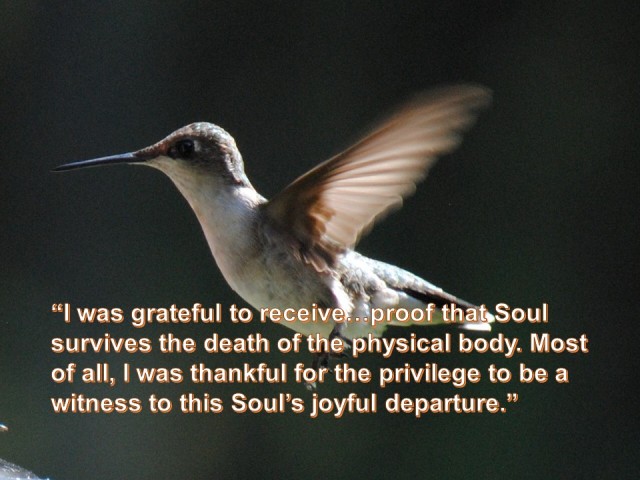 In this story, the writer gives us another perspective on the concept of Soul as an eternal being. This viewpoint asserts that we are not primarily physical beings who have Souls; rather, we are Souls who have physical bodies. And, not only that, says RuthAnn in this story: When death is inevitable, Souls will sometimes leave their bodies behind before the final physical processes have finished.

As I entered the dimly lit room with my nursing equipment, I found a frail elderly woman, unresponsive and partially curled into a fetal position. There was no sign that she was aware of my presence, so I took her vital signs and found them all within normal parameters. Then, I began to gently wash her face and hands as part of the evening bed prep. I felt tender compassion for this Soul who seemed trapped in a body she could not move; probably she was unable to speak either.

I had been employed as a nursing aide at this care facility for several months. This was back in the mid-1970’s when hospice care was unknown in most parts of the US; and, in homes like this one, we did the best we could to make our dying patients comfortable. It was a demanding job, but I enjoyed interacting with the mostly-elderly patients. It was rather like having forty grandparents to assist me with the tasks of daily living. I had always thought it wise to learn from other’s successes and missteps. I was fascinated to hear stories of their youths, and the troubles or joys they had encountered throughout their lives.

My usual assignment was on the first floor, where many of the patients were alert and oriented, with chronic but not rapidly progressing illnesses. Due to a staff shortage on this particular evening, I was sent to the second floor, where I was unfamiliar with most of the residents. Many of them were severely impaired, close to dying, or in coma.

As part of the normal evening routine, I entered the room of this elderly woman. Suddenly, I became aware of a feeling of great intensity. It seemed as if a powerful spotlight was bathing the bed in bright golden light although, outwardly, the room remained dim. I knew something very significant was about to happen.

Next, there was a sense of eruptive movement, and with my inner senses, I perceived this Soul leaping out of her body in a great exclamation of joy and relief. I had just a quick glimpse of a bright, sparkling being before she zoomed rapidly upward and vanished from my perception. I was awestruck. I knew I had just witnessed a Soul leaving her body.

Nonetheless, the woman’s physical body continued to breathe shallowly, just as before. There was no outer evidence of her departure. I continued the bed bath routine, yet I had been transformed by the experience and filled with Divine Spirit. I was exquisitely aware of being Soul operating a physical body, rather than being a person who “had” a Soul.

As I gently tucked in the patient’s blankets and turned to leave her—still physically alive—another aide entered the room and cried out in dismay before hurrying to summon help from the nurse on duty. I later learned that this patient (let’s call her Joy) was normally alert and much beloved by the staff. Although death was a common event that staff usually took in stride, Joy must have touched many hearts deeply, because her regular care givers were very distressed. They grieved openly when her physical form shut down completely a few hours later.

For my part, I tactfully removed myself to the other wing of the building where I continued my work. I had experienced such incredible awe and joy at the moment of this woman’s transition into the heavenly worlds that I did not want my happiness for her to offend the other staff who were grieving so deeply. With quiet wonder, I treasured this experience in my heart.

This was my first personal experience of the reality that Soul can leave the body before physical death. I wondered whether my loving presence or gentle touch had, in some way, assisted this Soul’s release from her body. I was grateful to receive such dramatic personal proof that Soul survives the death of the physical body. Most of all, I was thankful for the privilege to be a witness to this Soul’s joyful departure.

2 thoughts on “Can Leaving the Body Behind Be Joyful?”