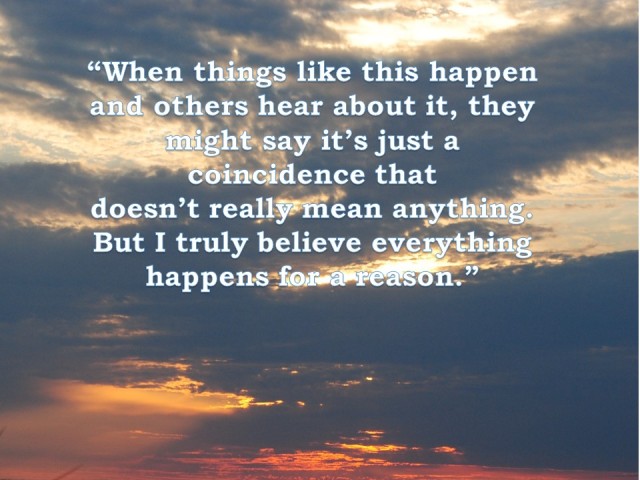 Bianca has suffered three great losses in the course of her young life, and these deaths have hurt her deeply. Still, she is buoyed by the certainty that her loved ones are still with her when she needs them.

In the second of two stories, Bianca tells how she and her mother escaped catastrophe on a snowy winter highway, and how she believes her departed Nonna and Nana had a hand in it. (See the first story in our post from December 10, 2017)

My Nonna (grandmother) passed away on December 8, 2006. She was an amazing, beautiful woman, and very special to me. From the time I was four or five years old, she taught me how to cook and sew, and we would spend a lot of time with each other. I was at my Nonno (grandfather) and Nonna’s house almost every single weekend, right up until she passed away.

Her death has been really hard on me, but I know that she is still here.

The evening after she passed away, the sunset was the most beautiful I’ve ever seen. It was all kinds of reds, oranges, and yellows with the clouds that just made it so much more beautiful. I knew that was my Nonna telling us she’s at peace, and that she’s okay, and she’s still here.

Now, when I’m having a hard time, I sometimes smell her scent. I just know that it’s her, because I recognize the faint powdery, flowery smell. Sometimes I feel like she’s just giving me this huge hug. It’s like she’s saying, “I’m here, I love you”.

My Nana passed away on July 14th, 2010. She was a very good friend of the family, and she was truly like another Grandmother to me. Like my Nonna, she was a very special and beautiful woman. When my siblings and I were younger, she would often babysit us, and I remember always looking forward to it, because we would always have such a fun time with her. She was a kind, gentle soul who loved nature and animals.

In our backyard, we have an area of cement that leads out to the driveway. Beyond it, there’s a small area with patio stones, and the rest of the yard is grass. Shortly after Nana passed away, a single little pansy-type flower popped up between the cracks in the patio stones. It was a beautiful, bright yellow with a chocolate brown stripe up the middle. We searched all around to find other flowers like it, where it might have come from. We even looked in the neighbours’ gardens, but found nothing similar.

Also around this time, a small brown bird perched itself in the corner of my window outside, and it stayed there for about three days. To us, these unusual gifts from nature were a huge sign from Nana, saying she’s still here and that she’s okay.

The winter following my Nana’s passing, my Mom was driving both of us home from Toronto after dropping my aunt off at the train station. The highway was covered in snow, ice and slush, but traffic was still moving at between 90 and 110 kilometres per hour. It is a divided highway, and we were on a section that has four lanes going in each direction.

A big transport truck was in the farthest right lane, and we were in the lane next to it. The truck was kicking up a lot of snow and slush, so my Mom slowed down in order not to be so close. As she did, our car began to swerve all over the road. We almost went in the ditch, then spun around so we were now facing the oncoming traffic. Still moving very fast, our vehicle started sliding sideways. We were heading for a cement barrier, so Mom told me to brace myself, because my side of the car would strike first.

Then we said, “I love you,” because we both thought we were going to die.

But—suddenly for no apparent reason—our car just came to a complete stop. It was as if something stopped us. We were only inches away from the wall. Miraculously, at that moment in the middle of the day on a section of Ontario’s most-crowded highway, there was no oncoming traffic for miles. We sat there a few moments, just trying to process what had happened before Mom carefully turned the car around and continued driving us home.

Mom and I truly believe that my Nonna and Nana were with us that day, because there is just no other explanation for our car stopping like it did, when it was sliding at such high speed—then to have no oncoming traffic besides!

When things like this happen and others hear about it, they might say it’s just a coincidence that doesn’t really mean anything. But I truly believe everything happens for a reason.