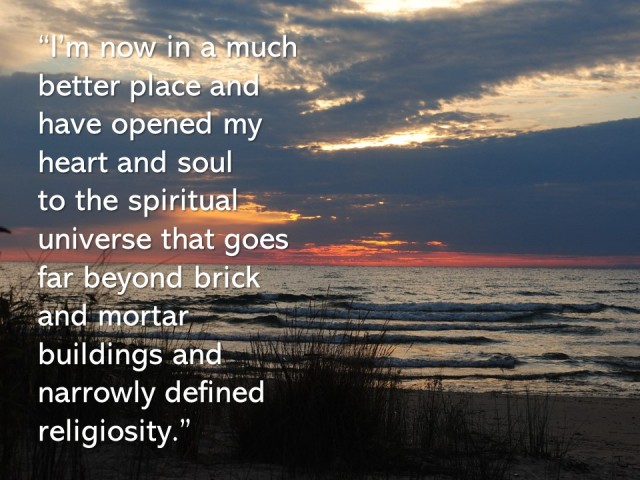 If Near-Death Experiences (NDE’s) are characterized by overwhelming feelings that we are loved by some power greater than ourselves, is it possible that – besides helping us lose our fear of death – they can also help us heal from hurts and traumas?

In the story below, “Andrea” reveals how attempting suicide to escape an un-loving and abusive father resulted in an experience that set her on a path to the best love of all.

My birth in the early 1950s was overshadowed by physical and mental health issues my father brought home from World War II. A grenade had exploded near him on a beach in France, and it was months before he could be shipped home to Canada. Despite several surgeries for his traumatic brain injuries, he remained plagued by chronic pain. Added to this was severe psychological injury.

When I was born in 1954 to his second wife, Post-Traumatic Stress Disorder (PTSD) had no name nor treatment. His bouts of heavy drinking, unprovoked rage and physical abuse frightened all those around him. My mother finally left him after losing a stillborn boy when I was three. I was left with my grandparents in what became a merry-go-round of staying with them and then sleeping on a couch or camp cot at my dad’s.

Well before I reached my teens, I was developing symptoms of what is now known as Complex PTSD. C-PTSD is experienced by children who grow up in an unpredictable and unstable emotional and/or physical environment. When I was 11, my father’s common-law partner committed suicide after several years of physical and psychological abuse, which I had often witnessed and been a victim of myself.

At age 12, my father took me to a gynecologist to find out if I was still a virgin. He said I was “promiscuous”. He kept me on such a tight leash that I couldn’t have been, even if I had known what the word meant. Decades later, I realized my father made that appointment because he had physically molested me but couldn’t remember what happened. I had fled from that incident in the middle of the night to my grandparents but would not tell them what had happened. I believe my grandfather told his son he needed to have me checked by someone other than our family doctor. I was humiliated to have a total stranger explore ‘down there’.

When I was 13, my father could no longer hold a job or keep an apartment. We moved into my grandparents’ one-bedroom apartment. My dad slept on a day bed in the dining room. I slept on a canvas lounge chair in the same room, which I folded and put away each morning. By this time, my dad was out drinking every day until the last bus. He’d stagger in at midnight and want a cooked meal because he’d missed dinner. He also wanted me to get him up and feed him breakfast before I went to school. But, he could almost never wake up, so I would just go to school, only to be called home to get his breakfast and be raged at for not waking him up.

I couldn’t win. By the time I was 15, I was mentally and emotionally exhausted. My grades were slipping. My morning classes were Math and Physics – not my best subjects and not helped by missing classes. I couldn’t bring friends home and couldn’t join after-school team sports unless I got a note from the coach about the practice and game times so my father could set times for me to be home by “or else”. And then there was the unpredictable and frequent physical abuse. There were days at a time when I couldn’t go to school because of a black eye, swollen face, or cut lip. I lived like this 24/7 for well over two years.

His parents were terrified of his temper. Thankfully, he didn’t attack them, but there were a few shoving matches, with my grandfather threatening to call the police. The one time he did in the summer of 1969, it was to protect me. But the police stayed outside and wouldn’t come in. In my embattled mind, no one could protect me. My spirit was finally broken.

That fall of Grade 11, I took an overdose of my grandmother’s sleeping medication, which landed me in the emergency room and, subsequently, intensive care. While in the ER, I had an out of body experience. I was floating above the bed while nurses were working over me. I then saw out into the hall from the ceiling and watched my father walk out of the hospital, leaving no family to be with me that night. Next I felt myself being drawn to a wonderful, silvery light. It was a soft and caring place. There was an entity there who was ready to welcome me, but I had to make the choice to go there or go back. I wanted to go with that spirit, but I chose to go back after the entity told me there were things my soul needed to learn.

I spent a month on the psychiatric ward. I had few visitors because people weren’t supposed to know where I was. Social services made one home visit, and I came back to a bed with a mattress in my grandparents’ bedroom. There were also no more calls to leave school and no more midnight meals to make. My dad stepped up his drinking. Both he and my grandmother died less than a year later, just eight weeks apart.

I’m now 65 and learning more than I have in all the past years as a teen, adult, mother, and now grandmother. The one thing I have finally learned is to love myself, warts and all. I’m learning that to truly love others, I must first love myself. It’s taken me decades, plus cancer and heart disease, to understand this. I’ve also forgiven my father. My real father was a good, kind, smart, and funny person who became trapped without adequate treatment for his broken mind and body.

I’m now in a much better place and have opened my heart and soul to the spiritual universe that goes far beyond brick and mortar buildings and narrowly defined religiosity. As Susan Aglukark sang back in the 80s: “O Siem, we are all Family. O Siem, we’re all the same . . .”

The author has changed her name to protect her identity . 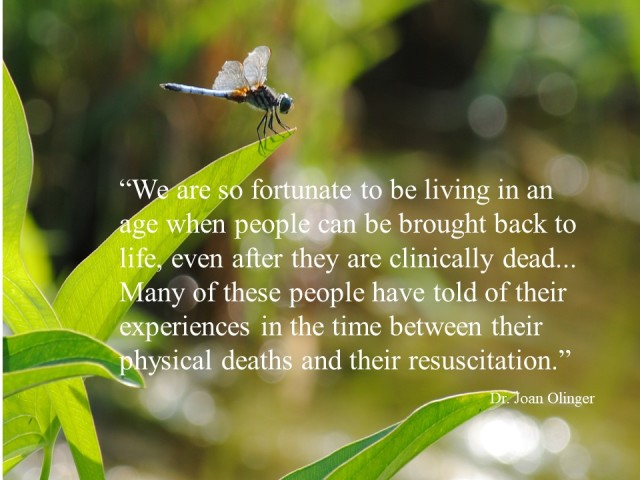 When we share stories by contributors to The Meaning of Forever book project, love shows up as one of the abiding qualities in the variety of experiences people have with their departed loved ones. This seems to be true of near-death experiences as well, and as Dr. Joan Olinger writes, that feeling of transcendent love and the knowledge that life continues after expiration of the physical body are two lasting benefits cited by those who have died and been brought back to life.

Because near death experiences are one more way to show that life continues, regardless of whether we have a physical container, The Meaning of Forever Project is also seeking stories about these experiences. Read Joan’s blog, first posted July 7, 2017, to see how NDE’s can be a source of great comfort in grief and a means for releasing fear.

What would it be like if you knew for certain that you do not die when your physical body dies; that, Instead, you continue as yourself, with your individuality intact?

We are so fortunate to be living in an age when people can be brought back to life, even after they are clinically dead; that is, when their heart stops beating and they stop breathing. Many of these people have told of their experiences in the time between their physical deaths and their resuscitation.

When my Father passed on a few years ago, I was deeply distressed. My distress was relieved to a great extent, however, when my brother told me that Dad once had a near-death experience after a heart attack. From then on, he was not afraid to die. Knowing of this occurrence gave me great comfort. It was proof that the essential part of my father—some call this soul—continues independently of his physical existence. My brother said our dad’s story helped him lose some of his own fear of death.

In 1975, in his groundbreaking book called Life After Life, Dr. Raymond Moody wrote of accounts by people who had been brought back to life, and he coined the term “near-death experience” (NDE). I read Dr. Moody’s book as a young woman and became very interested in NDE’s (See my May 11, 2017, blog about why The Meaning of Forever Project is so important to me).

About 15 years after reading Dr. Moody’s first book, I met a patient in her forties who had been pronounced dead and been resuscitated. Her near-death experience transformed her life. Having not done anything artistic since Grade 8, she became an artist and a poet, and won contests for her creative work. When I asked what happened during her near-death experience, she said it was very hard to put into words. Then she said she had gone through a tunnel, met with a brilliant, loving light, and that she was “in love” the way she and I were sitting in that room. I took this to mean that she had felt totally surrounded by love.

Dr. Pim van Lommel, a Dutch cardiologist and one of today’s most prominent scientific researchers of near-death experiences, is a contributor to a book called Surviving Death by Leslie Kean. In that book, Dr. van Lommel writes: “The NDE (near-death experience) is almost always transformational, causing enhanced intuitive sensitivity, profound insights and re-evaluations of life, and a loss of a fear of death.”

In his book God and the Afterlife, Dr. Jeffrey Long writes that near-death experiences often include the following: a) an awareness that the experiencer is no longer in their physical body, b) heightened senses, c) going through a tunnel, d) seeing a brilliant light,  e) intense and usually positive emotions, f) going to heaven or otherworldly realms, g) meeting with deceased relatives, friends or mystical beings, h) a review of the person’s life, i) learning special knowledge; and, j) returning to the physical body. He gathered this information scientifically through a questionnaire administered by the Near-Death Experience Research Foundation (INSERT LINK), which he established.

In the process of working on The Meaning of Forever Project, I have had a chance to read many books, watch some incredible documentaries and talk with several friends who have had near-death experiences. Through this process, I too have lost my fear of death, and I take comfort in knowing that departed loved ones are just fine and enjoying their new existence.

Here are some of those books:

Disclaimer: These books, and these authors, do not necessarily represent the beliefs or opinions of The Meaning of Forever Project.