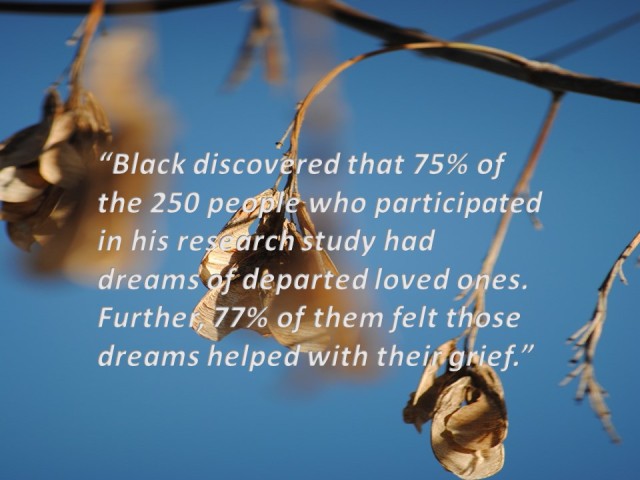 Can dreams and visions give insight into an afterlife?

Have you ever dreamed of a loved one who has died? Have you felt that, just maybe, he or she is still around in your waking life? Maybe you’ve never mentioned it to anyone, because you don’t want to be told you’re not moving on from your loss the way you should.

When psychology student Joshua Black’s father died suddenly a few years ago, Joshua began having dreams with him that later inspired his research into what he calls “Grief Dreams”. You can see our blog about Joshua’s personal story here. Now a PhD candidate at Brock University in St. Catharine’s, Ontario, Black maintains a Facebook page (see it here) that encourages others to share their Grief Dreams, and to use them as a way to help them through their loss.

Black discovered that 75% of the 250 people who participated in his research study had dreams of departed loved ones. Further, 77% of them felt those dreams helped with their grief. Even so, says Black, he’s found that many people don’t talk about their Grief Dreams, even with friends or relatives.

Black’s Grief Dreams Facebook group is one way he provides a safe space for the bereaved to share their dreams and to feel assured that their experiences are valid. The group welcomes dreams of departed animals as well as humans.

But Black is not the only academic interested in dreams of the dead. At Hospice Buffalo in Cheektowaga, New York, the Palliative Care Institute is studying the way dreams and visions of departed loved ones affect people who are dying. Led by Dr. Christopher Kerr, these researchers have identified several types of what they call ELDV’s (End-of-Life Dreams and Visions) and concluded these experiences comfort dying patients and help reduce their fear of death. You can click here to see Dr. Kerr’s TEDx Talk about his research and what inspired him to get started.

From interviews with 59 terminally-ill patients, researchers found that 88% had at least one dream or vision (as distinct from hallucinations, which would be characterized by confusion, fear and high anxiety). Ninety-nine per cent of the patients believed these experiences were real. As death approached, patients said comforting dreams of deceased loved ones—including pets—became more common.

But many of these people, too, were reluctant to share their experiences for fear of being thought mentally incompetent.

Nevertheless, say the researchers, these ELDV’s need to be accepted as a valid part of the dying process for terminally ill patients. An article on the Hospice Buffalo website quotes Pei C. Grant, PhD, Director of Research for the Palliative Care Institute:

“The study clearly indicates these dreams and visions are a profound source of potential meaning and comfort for the dying…” he says. “Participants in the study overwhelmingly indicated their dreams and visions lessened the fear of dying, gave them comfort and made the transition from life to death easier.”

At The Meaning of Forever Project, we are pleased that the work of scientists and academics is moving toward something our contributors already know: That the bond of love between souls does not die with the physical body; that life continues after the human shell is finished—and that this continuation of life and love is what gives true meaning to the word “forever”.

If you would like to share an experience you’ve had with a departed loved one—whether in a dream or in some other way—we would love to hear from you. Just email us at themeaningofforever@gmail.com 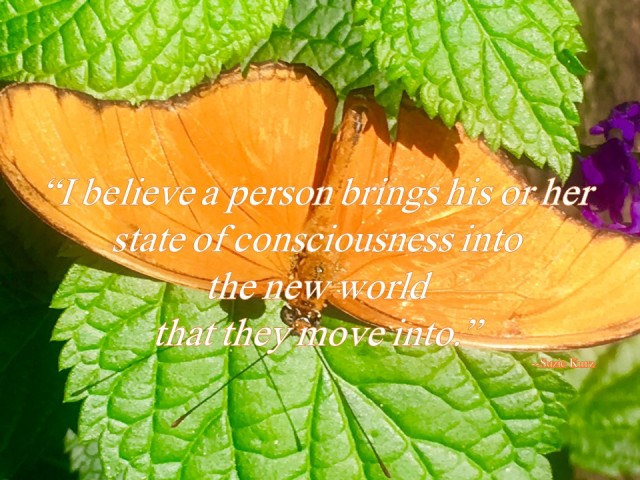 When my father died of a heart attack, even if I wanted to go home to the Philippines, I couldn’t.

I sorrowed painfully, remembering how my father worked all his life, striving so hard on our farm with a primitive single plow, pulled by a carabao (water buffalo) day in and day out, to ensure that all his eight children finished university in order for them to have a better life and make a difference in this world. I remembered how he taught us to respect resources and how he strove to save every penny for our education.

But Fred, my husband, and I had just started building our dream home in Toronto. It was to be a passive solar house, and we were the contractors for the first time. We were new to this venture and needed to be together to make all the decisions regarding the construction.

A few weeks after my father passed away, while asleep, I had an experience in another world. I found myself on a beautiful coconut plantation. Tied between two coconut tree trunks was a hammock where my father was lying comfortably and swinging gently with the breeze. Surprised and elated I ran to him with tears rolling down my cheeks.

I said, “I am so sorry I couldn’t come home to be with the family at your funeral.”  I hugged him.

He said, “Look around, see my beautiful coconut plantation.”

When my father was still living in this physical world, he started planting coconuts but he only managed to plant a few trees before he departed.

Suddenly, I heard a chugging sound of a tractor, I turned and there was my brother Carlos, who had passed away two years earlier. I ran to him. Seated high on his tractor wearing a wide brimmed straw hat and looking down at me with a winsome smile said, “See, I told you, I will join papa to do farming one day, and here we are!”

The scene slowly faded away and I woke up. But that experience was so real, I cried with joy. It remains vivid to this day, nearly 40 years later. I always knew that life continues after the physical body dies. This experience with my father and my brother proved that.

I believe a person brings his or her state of consciousness into the new world that they move into. Our aspirations are recorded in our transcendental selves and therefore are taken anywhere we go.

I am truly grateful for this experience.

Perhaps Suzie’s story reminds you of an experience that helped reassure you that your departed loved one has not truly “gone”, just moved on to another existence. The Meaning of Forever Project is collecting stories from people like you. Our aim is to demonstrate, through your stories, the continuity of life; that neither life nor love ever ends. See more about The Meaning of Forever Project here. To see more stories like Suzie’s, subscribe to our Blog by clicking the button to the right of this story, or go here to see previous posts.